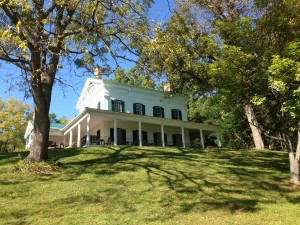 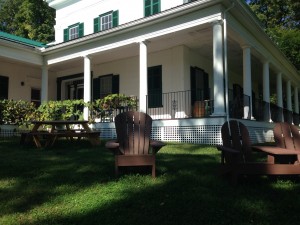 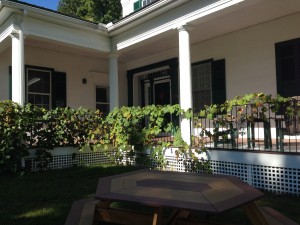 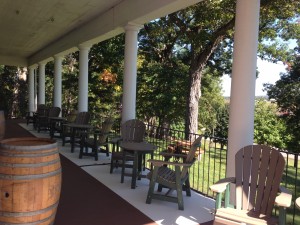 Our winery and tasting room is located at the Hampstead Mansion, listed on the National Register of Historic Places as Henry Rose House.

The house was built in 1838 by Henry Rose, who was of the family which originally settled on Rose Hill in Geneva, NY. The lumber was ‘laid down’ on the shores of Keuka Lake, at what is now Keuka Lake State Park. Although there were six fireplaces, the first record of stoves is in the late 1850’s with the purchase of a parlor stove. There is no indication of a bake oven in the kitchen fireplace, but a reflector oven with spit is presently stored in the attic.

Under the woodshed is a brick vaulted ceiling and a cistern with a capacity of 2,000 gallons. The cellar is under only the main part of the house.

This house audibly ‘works’ with changing weather conditions. The main structure is still plumb, square, and true, as indicated by the ease with which the pocket doors on the main floor between the parlors operate.

There are only four rooms and a hall on the main floor and two large and two small bedrooms on the second floor. There are two ‘eaves’ rooms over the kitchen, accessed by a separate stairway. The south or library wing also has its own stairway leading to a single room with shelves and hooks. The cellar also had two areas for food storage, which were also locked.

As you enter the front door, note its inset and the trim. The side glass is the standard 12′ by 18′ with wood overlays to suggest small panes. Originally the door was solid. The doorbell is original. The screen door makes use of the same shutters used elsewhere. There are four blind windows for balance. Each window has a Roman numeral mark, which corresponds to the shutters and the storm windows, only one of which still remains at the stair landing. Please note as you go from public rooms to private rooms to service areas that the moldings change from ornate to ordinary to plain, un-milled woodwork.

Excerpted from Welcome to the Hampstead, the Historic Home of Gloria Morgan Sill Tillman, circa 1980. 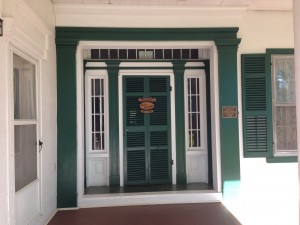 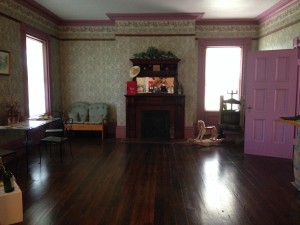 Henry was born in Virginia on January 9, 1802. He married in 1832, Sarah L. Macomb, of the city of New York, where she was born in 1801. They settled in Jerusalem in 1836, adjoining his brother on the east side. His farm was composed of several earlier and smaller farms originally owned by Israel, Jacob and Nathan Herrick, and Ezra Wittar, altogether 500 acres, 60 acres of which, embracing the “Kinney’s Corners and tavern property,” he sold to Jasper Traver. Dr. Rose had been largely interested in wool growing from Merino sheep, and fruit growing, especially apples and pears.

The area where the Rose family purchased land in the township of Jerusalem is a valley of an ancient outlet of the west branch of Keuka Lake, where it has flowed from what is now its head over to the east branch, which formed the base and principle area of the farms of the Messrs. Rose, with a hill side slop on the north forming one of the most eligible and beautiful agricultural sections of the county, and thus conveniently and beautifully situated between the two branches of Keuka Lake and the villages of Branchport and Penn Yan, on one of the best surfaced and improved roads in the county (a plank road). Mr. Henry Rose was educated as a physician, but chose to follow instead the business of farming.